Ludanto: Ok, not a really interesting post.  The site that used to host the FAQ/Errata for "The Department" seems to have gone away, taking with it this pretty important list.  Shaun Travers found it in the Wayback Machine (Clever.  I should have thought of that.) so I'm re-posting it here for my convenience and for posterity.  I claim no rights to the text that follows.

Q: In one section of the PDF rules it says that Fate = Resolve, in another it says Fate = Logic. Which is correct?

A: The rule is that Fate = Logic

Q: It seems that most (Human) suspects have a pretty hard time of things. Resisting a KO uses TN4, which they can only achieve on a double 6 and breaking bonds after arrest is TN5, which is not possible for them at all.

A: When resisting a KO check, a character uses their Resolve (color version page 23). In the case of a minor human suspect, this is a 4. It's tough but doable.

As for the breaking the bonds, you are correct, a normal human cannot break them. Zip ties in 2060 are pretty strong.

Ludanto: Wait.  Is that true?  Why have I been rolling like, 4 dice for the suspects' escape tests?  Weird.  Well, good.  At least that seems less ridiculous now. 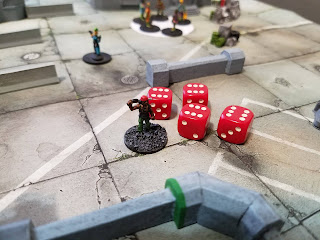 Q:"Iron Will" vs. "Tough" Traits: Both cost 1 point, but Tough is much better with it's +2 re-rolls on KO checks. "Iron Will" is made redundant by this, isn't it?

A: Iron will adds a die to your total resolve pool, while tough allows you to re-roll 2 dice after you have made the KO check. you could combine these two to make a really touch character!

Q:Bureaucracy: This skill is mentioned numerous times but there don't seem to be any rolls that use it. This means quite a number of character options become less attractive, "Getting too old for this" for example.

A: You're right, I cant find any uses either. You should use this skill when asking for more budget or using the "by the book" trait to reduce your IAP.

Q: Strength and Agility: The rulebook mentions these two stats a few times, I suppose Strength means Prowess, but what does Agility refer to?

A: These are relics from Blasters and Bulkheads (the granddaddy of a the Department). Prowess should be used whenever these are encountered.

Q: Crowd Dispersal: There is no range listed for the crowd dispersal special action that I can see.

A: The range should be 4cm. looks we left that one out.

Q: If I don't interview or interrogate a suspect, how am I supposed to find out if they are a fabricant when i'm in combat with them?

A: Per federal law, suspects are human until proven fabricant. this means that any unknown suspect uses the human  profile until they are determine to be a fabricant. You can determine a suspects humanity either remotely with a fabricant scanner, or using a verbal test.

The fluff reason for hidden faricant acting like humans, is that fabricants that have had skinjobs are programmed to mimic humans in physical characteristics. Since fabricants don't have a flight or fight response per se, they will continue this ruse until they are sure they have been found out.

For a lot of suspects, scanning is not really feasible, sometimes in a firefight, you have to assume their human. Like the gang that jumped you in the battle report, there is no really good way of scanning them. And in this instance it doesn't matter, since you can go full bore on them anyway.

Q: Now, there is the possibility that you are attacked by a suspect before you know who they are – i.e. the murderer jumping from the crowd in Mission 3. If you use lethal force, can you still haul the corpse to the station to see if it was a fabricant? Or, can you scan a dead body in the field?

A: You need to roll for every apprehended and KOed suspect after the mission. The paramedics will quickly see if a suspect is a fabricant and turn them over to the DFM. These KOed fabricants can be scanned at the station for evidence. You can't scan a KO'ed suspect in the field.

Q: In the "Grass the Neighborhood" mission, am I right in thinking that you don't make subroutine rolls for 'person's of interest' until you generate their event?

A: Yes you are correct, persons of interest are not suspects per se, so they do not roll subroutines until they become suspects.