TSoY: Some of My Best Friends Are Thieves 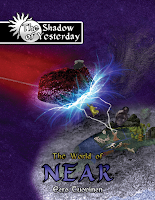 Another RPG recounting?  Is this what I'm doing now?  I don't know.  It's kind of neat in the moment, and it's a chance to try these games that I'll probably never see in action otherwise.

This is another "adventure" set in the World of Near.  In the previous adventure, Pedro "The Butcher" Vina was hurt pretty badly, and wandered off into the forest, losing track of his ratkin companion, "Chaser", who was last seen trapped in a hallway with approaching soldiers.

I decided that, if this were a TV show, the next episode would pick up from Chaser's point of view, so that's what I did!

I used the Mythic GM Emulator as a "Game Master" last time, but I have since purchased a Mythic GM Emulator Deck, which is a card deck that compiles pretty much everything you need into a single deck of cards. It also has a couple of features that weren't in the book.

It took a little figuring out, and at first I thought there was a problem with the random distribution, but it turns out that I was mistaken.  There is a thing, though, when shuffling the cards, where they want you to turn half of the deck around in order to randomize the orientation as well.  Magic the Gathering (and other card games) have trained me to always keep the orientation the same.  Going against that instinct has been taking a bit of conscious effort on my part. :)


Scene 1:
(Mythic: Chaos 5)
Friend Pedro shouts, and Chaser dives through the door, away from the monster and back into the hall.  But Pedro didn't make it out!  The door slams shut, and Chaser can hear the sounds of fighting from behind it.  He scratches at the latch desperately, but the portal is stuck fast.
Soon, he hears the clatter of armed men charging up the stairs behind him.  He instinctively ducks into the shadows.
(-6 Instinct [Secret of Rat-Stealth])
(If he doesn't draw attention to himself, he can automatically hide from humans for 1 Instinct each.)
It feels like forever, trapped in that corner, but eventually he finds an opening and scurries out of the tower.  As he waits, he sees the men lead the bound monster away.  When they're gone, he finally searches for Friend Pedro, but finds only the injured man's bloody hand-prints on the side of thee building.

Scene 2:
(Mythic: Chaos 4)
Chaser follows Friend Pedro's trail through the woods, and eventually he wanders into a group of strangers armed with spears.
(Mythic: Do they have Pedro?  Unlikely.  No.)
But maybe they know something.  Chaser hides behind a tree and calls out, "Hello, Human-Friends! Chaser looks for Friend Pedro!  Haz you seed Friend Pedro?"
(Mythic: How do they react? "Trick Food") 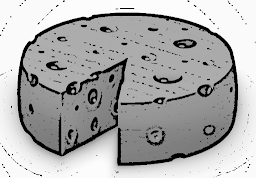 "Yes, we might have seen somebody," one of the men calls back.  "Come, join us and we can have a bite to eat and talk about it!"  The stranger pulls out a small wheel of cheese and waggles it before him.
Little hearts pop up over Chaser's eyes, and he approaches the men, outstretched claws grabbing greedily.
(Key of Cheese: 1XP)
When he gets close, the strangers grab him!
(Brawl vs Brawl: Success!)
They quickly pin Chaser to the ground.  He actually manages to get the cheese for a moment, but soon he is bound and muzzled...
Scene 3:
(Mythic: Chaos 5 - Interrupt Scene - "Move Adversities")
The strangers drag Chaser through the woods to who knows where.  He glares at them, but they seem unimpressed.  Suddenly, other people burst from the underbrush, attacking the strangers!  Caught off guard, the strangers don't fight, but instead grab up Chaser and run through the forest!
(Mythic: Do the attackers catch them?  50/50.  No.)
With his hope of rescue (or whatever) falling behind, Chaser takes advantage of the distraction to try to escape his captors!
(Brawl vs Brawl - Chaser spends 1 Vigor: Fail!)
Chaser kicks and bites and scratches at the man holding him, and for a moment, it looks like he's broken free of the human's grasp, when a spear-butt bashes him in the head and he falls unconscious.
Scene 4:
(Mythic: Chaos 6 - Altered Scene)
Chaser wakes up, tied to a stake in an armed settlement camp.
(Mythic: Is Pedro also a prisoner?  Likely. Yes.)
Chaser looks to his left, and as his eyes focus, he can see Friend Pedro tied to the stake next to him.
"Hey, buddy," he says with a groan.  "Welcome back!"
(Mythic: Are the Rats still with Chaser?  Very Likely. Yes.) 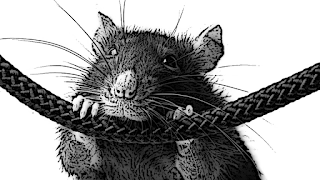 Chaser grins and then begins whispering to the Rats.  Soon, the two rodents are chewing their way through Chaser's and Friend Pedro's bonds.
(Mythic: Is there a guard?  Likely. Yes.)
Meanwhile, the two whisper out a plan, and soon, Chaser is calling to the guard in pained whispers, luring him into range as Friend Pedro gathers his strength for an attack!
(Deceit vs React: Fail!)
(Brawl vs Brawl: Fail!)
The guard takes a couple of steps forward, but then becomes suspicious and turns to see Friend Pedro just in time to side-step and take a swing at him!
(Extended Conflict!  Knock Out Guard vs Raise the Alarm)
(Chaser - Opposed Brawl for Dice: 0)
(Pedro - Opposed Brawl for Harm: 0)
(Guard - Opposed Brawl for Harm: 4!)
(Pedro and Chaser take Harm 4! Nooo!)
Chaser tackles the guard's legs, trying to trip him up for Friend Pedro, but gets kicked across the clearing instead, leaving the guard free to elbow Friend Pedro hard in the face, stunning him!  The guard backpedals and shouts out an alarm!  "Help!  The prisoners are escaping!"
(Screw it! New plan! Run!)
(Pedro - Sport vs Sport: Success!)
(Chaser - Sport vs Sport: Tie!)
Friend Pedro turns and dashes across the camp, ducking a few men that try to intercept him before he can disappear into the forest!  Unfortunately, Chaser finds himself cut off!  As the guard comes up behind him, he dives inside a nearby tent, and then out the other side, trying to find a place to hide.
(Chaser spends a point of Instinct)
(Thievery vs React: Success!) 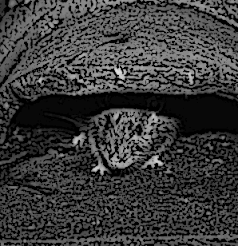 Chaser manages to wriggle under a log pile and out of sight of his pursuers.  Eventually, they give up, and he's able to slink out of the camp.
(Mythic: Can he find Pedro in the woods? Likely. Yes.)
He finds Pedro waiting for him.
"Well, buddy, I guess we're doing this the hard way", he says with a pained sigh.  "There's no way we're getting back in there to get our stuff."
Chaser looks like he's about to cry.
"I know, buddy," Pedro says.  "I guess we'd better get going.  Maybe we can find something to eat on the way."
(Woodcraft: Success!)
Scene 5:
(Mythic: Chaos 7 - Interrupt Scene - "PC Negative - Struggle of a Burden")
A few days later, Pedro can't keep up.  His hunger and his wounds are too much.
"Sorry, buddy," he coughs.  "You'll have to go on without me."
Chaser's whiskers tremble, and his eyes grow hard.  Licking his paws and rubbing them together, he grabs Pedro and lifts him to one knee.  It's an awkward series of lift, push, drag, lift, push, drag.
(Endure: Success!)
Chaser manages to keep this up for nearly an hour before Pedro finally stops him.
"Fine!  You've made your point!" Pedro says with an eye-roll, and then he struggles to his feet against a tree and the two continue their journey.
Scene 6:
(Mythic: Chaos 6 - Altered Scene)
(Refreshment Scene)
Some time later, the pair stumble, exhausted, upon a family of farmers outlaws bickering as they go about their chores.  They're understandably cautious.
(Storytell: Success!)
Chaser recounts their adventure thus far, and the family, who have had run-ins with the strangers and the Red Company as well, take them in.  Over the next few days, Pedro teaches some of the young men some melee techniques, and Chaser continues to entertain with his rodentine antics.
(Key of Outcast: 1XP for Pedro)
(Key of Cheese: 2XP for Chaser)
(Mythic: Does the family know the strangers? 50/50/ Extreme Yes!) 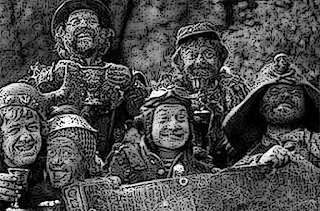 The family tell of the Khalean rivals who often attack them, claiming that this is their territory, and how they had nearly caught several of them a few days ago.  Chaser, Pedro and the family become friends and there are several nights of drunken revelry, and on one such night, Pedro agrees to help the family knock over a merchant caravan.
What have they gotten themselves into now?
(Both Chaser and Pedro refresh Vigor and Instinct Pools.)
(Pedro spend 3 Vigor to heal Harm 1 and Harm 2.)
(Chaser spends 1 Vigor to heal Harm 1.)
Is This Even Worth It?
I don't know.  Maybe?  It's certainly an exercise of the RPG muscles.  A few more of these, and maybe I could even run a real game again.  I'm thinking that this particular game could use a little preparatory work, though, in order to better enable meaningful choices and hitting those Keys.  I'll have to think about that before next time, assuming that I play the same game.  I'm considering trying something with Cosmic Patrol/SR:Anarchy/MW:Destiny.
TL;DR
The rat-man side-kick got separated from his boss, failed to track him down in the woods, got captured.  Boss was there (also captured).  They escaped, but hurt and unprepared.  Then they stumbled onto some friendly outlaws, got drunk and agreed to pull a job with them.
Pedro earned 1XP and Chaser earned 3XP, which grants him an Advance.
Considering the physically demanding events they've gone through recently, both spend their Advance to upgrade their Vigor Pools by one.
And that seems like a good stopping point.  I've got to work tomorrow.
Ĝis la revido!
Jason "Ludanto" Smith C;E
Posted by Ludanto at 3:04 PM