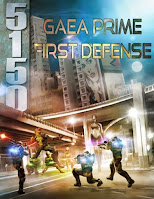 Let's face it, whenever I see a new sci-fi skirmish game, it seems like the first thing anybody asks is "Can it do X-COM?"  If for some reason you're not familiar with X-COM, it was an old computer game of tactical skirmish combat that explored fending off alien infantry, raiding their crashed ships, and researching the remains to reverse-engineer all of their cool tech to use against them.  Great game.

Gaea Prime: First Defense is basically that: GP's first encounter with alien slavers raiding the Earth for resources, and the adventures of GP's armed forces as they kill the aliens and loot their bodies for research fodder.

Here's how my first game went...

You start with your "Star".  The "Player Character" of the game that holds the narrative together.  He's basically a badass with a few special abilities and protections to make him live longer.  And he's part of a squad of five other "normal" troopers.  They all start with assault rifles and grenades (that I never used) and "soft body" armor (the weakest available).  Ooh, and one guy gets a SAW.  Each trooper also gets a random perk (although some are actually penalties), but the Star gets to pick a second one.
Next we set up the table (I rolled the terrain randomly), place my guys on one end, and randomly placed the PEFs ("Potential Enemy Forces"), here represented by yellow triangles.

I have to warn you, my dice were weird today.  Despite the odds, the PEFs, which normally shift around the table, just sat there, waiting for me for a lot of the session.  But that gave me an opportunity to advance into the "urban" terrain.

Every turn, you roll an Activation die for each side, hoping to roll lower than your leader's Reputation score, but higher than your opponent.  If you roll too high, you don't get to go.  If you roll too low, the enemy goes first.  If the dice total 7, the high side might get reinforcements.  I didn't want to have to deal this skirmish growing out of control, so I chose not to play with reinforcements.  Anyway, I continued to advance, and finally one of the PEFs came at me.  As it cleared the trees it was revealed to be...
"Something".  That is to say, "nothing", but next time it's more likely to be something.

My guys poke around the corner to reveal the PEF as a squad of Hishen Slavers!  Unprepared for a firefight, they duck back out of sight.  The Hishen mission is to "Defend" so they don't try to follow.
Meanwhile, a roll of doubles on the Activation dice introduces the chance of a Third Party!  It's a Shadow Corporation!  (These are the opportunistic jerks working against their government to steal the alien technology first.)  Another PEF finally moves, this time toward the Shadow Corporation troops, but resolves as another "Something Out There", and is removed from the table.

Technically, the Hishen go first this turn, and that's great, because they can't see me and end up just sitting there.  On my turn, I round the corner with all of my guys.  The ones in front drop prone to allow for maximum firepower.  It's pretty much wasted, though, because these Hishen get murdered hard almost immediately.  Two-Hour Wargames has a pretty neat "Chain Reaction" system that lets the shooting go back and forth, but there's not a lot of "back" when the "forth" is a hail of "Obviously Dead" results.

Checking the Dead.  Hishen like to  "play possum",  a phrase which here means to "feign death".  You've got to go up to them and see if they're actually dead.  If you don't, they'll shoot at you one last time before they die.  Of course, it doesn't say when that happens.  Immediately?  When I approach within 1 inch?  If I stay away from them, am I "safe"?  I don't know.  If you do check on them, you roll, and they're either actually dead, they take a pot-shot at you and then die, or a grenade rolls out from under them and they blow up.  As it was, most were dead, a few shot at us, and only one hit, but for no damage.

The Shadow Corporation goons move into sight, but so far I've been winning all of the Reaction tests, and I get to shoot first, and effectively at that.  There hasn't really been much opportunity for the enemy to even get a shot at us.  Between reaction fire and active fire, the Shadow Corporate operatives are cut down.

It's almost over.  And then it finally happens!  The enemy wins the Reaction test and shoots at Agent M, sending him Ducking Back for cover behind the buildings.  The remainder of the squad proceeds to murder the poor blue bastard to death.

Mission success!
I roll on the Campaign Morale table and the enemy Morale (4) goes down to 3, and our Morale (3) goes up to 4.  If the enemy Morale drops to 0, they lose the Campaign.
Also, one of my squad-mates levels up and is now Reputation 5, just like Agent M.
Finally, I choose what to research from the (admittedly small) research tree.  I go with "Alien Alloys" because I want to get to "Hard Body" armor as soon as possible.  Unfortunately, Alien Alloys by itself doesn't do anything at all, a "filler", which seems like a missed opportunity.

Heck, yeah!  It's like X-COM!  It's going to be neat watching my tech get better and seeing my guys take the fight to the enemy!  Is the "Chain Reaction" system hard to understand?  Well, I feel like this is the best I've ever understood it (although the actual rules vary from game to game), so that's good.  The whole thing probably needs some nerds to go over it and catch typos and weird phrasing, though.
The "tech tree" is more like a "tech shrub", really, but when you're having to track everything by hand, it's probably best to keep things simple.  Plus, it looks like a run of good luck could end the campaign in five or six games anyway, so it's best to let you plow through the advancements as quickly as possible, probably.
If this session seemed pretty easy, I suppose that it was, but keep in mind that this was only the first mission, and I also got crazy lucky!  My dice were in murder mode.  And in my favor, for a change.
You can get the game from Two-Hour Wargames HERE!
(Oh, yeah.  I totally got a free copy of this for to make with the review, so take that into consideration.)